Trending
You are at:Home»Armenian Church»Sasnashen Youth Center
By Vazken Movsesian on July 21, 2019 Armenian Church, Armodoxy, In His Shoes, NEWS

Walking In His Shoes in… Sasnashen Village in the Town of Talin, Armenia 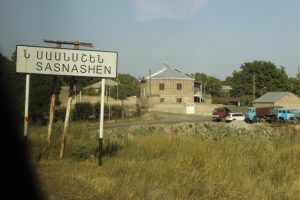 A place for kids to feel welcome, share and explore options to maximize their potential

Last Summer, at the request of the Prop Wash Gang I was invited to the Offutt Air Force Base in Nebraska to offer the keynote address at their gathering commemorating the 60th Anniversary of the shoot-down of US Air Force C-130 #60528. Before going any further…  let’s get the obvious questions out of the way: Why a priest of the Armenian Church? at a US Air Force base? to a group of hundreds of servicemen and their families? So let’s back up 60 years…

mission on the Turkish/Armenian border was shot down by the Soviets. The plane crashed in the village of Sasnashen, Armenia and lost its entire crew of 17 servicemen. The Soviets did not admit to the severity of the tragedy until after the fall of the USSR and by 1992 – some 34 years after the incident – the remains of all 17 men were returned to the United States for proper recognition and committal. Since that time commemorations have been taken place, including the placing of a khatchkar (cross stone) and a monument at the crash site with visits by U.S. military and government officials.

Now… on the evening of September 2, 2018, exactly 60 years to the date of the crash I stood before the servicemen and their families. I explained that in 1958 Armenia was completely occupied, that is, the place where the C-130 took-off (Van) was in Armenia occupied by the Turks and 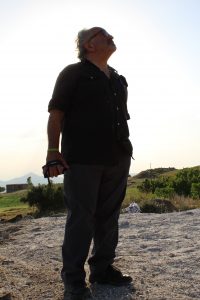 that where the plane crashed was occupied by the Soviets. After speaking about Armenian history and our faith as Christian, there in Nebraska, I offered the requiem hymn and prayer of the Armenian Church for the souls of the 17 victims of the shoot-down.

The group honored me by giving me a framed piece of the tail of the fallen plane. Then, spontaneously they took up a collection and asked that I use it to benefit the children of Sasnashen. Here, I had to confess that I did not know where Sasnashen was but I also promised that from this point on I would not travel to Armenia without visiting the village which had brought us and tied us together 60 years after the tragedy.

On October 25, 2018, I made it to the village of Sasnanshen – about 65km out of Yerevan toward the Northwest border of Armenia. The closest town is Talin (about 10 kms away) with a population of about 4,000. Through our Armenian Church I connected with Fr. Tade Tamazyan, the priest of the Talin and a number of villages that surround the Town, one of those villages being Sasnashen (population 750). My deacon Hrayr Nalbandian, drove us up to there and together with the priest we climbed a rocky road to the crash-site where a monument stands in this remote and obscure corner of the world. It is a tall standing memorial with a plaque written in both Armenian and English: 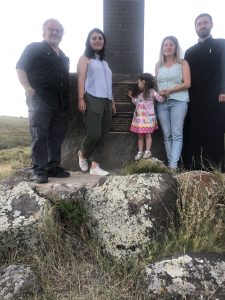 We must never forget that freedom is never really free.
It is the most costly thing in the world.
Freedom is never paid in a lump sum.
Installments come due in every generation.
All any of us can do is offer the generations
that follow a chance for freedom.

There, under the open skies and the silence of the village we offered a prayer for the 17 fallen servicemen as well as a prayer for peace.

In His Shoes’ Involvement

Since 2003 the In His Shoes ministry has actively initiated programs that effect and benefit some of the most impoverished and violence infected areas of the world, including in areas such as Darfur, Syria and Rwanda. After a recent project with the Starkey Foundation to provide hearing aids for over 2,000 inhabitants in Yerevan, we made a conscious decision to move beyond the limits of Yerevan with our assistance so to stay closer to our charter and so that our contributions can be directed in these often forgotten and overlooked regions.

In Sasnashen, beyond the economic challenges of village life, there are

few, if any, opportunities for young people to advance in education, or even to explore and exploit their potential. There are government schools but after school-hours and on weekends the children end up on the rural roads without supervision and/or guidance. Father Tade has access to the schools and offers weekly classes to children in the village schools and is known and recognized youth. We decided to use the Prop Wash

Gang funds to further opportunities for youth in the Sasnashen village by creating a Center for after school-hours, where young people can feel welcome, share and explore options to maximize their potential in life.

With the encouragement and blessing of Archbishop Hovnan Derderian, the Primate of the Western Diocese we quickly began work on organizing this program called “Sasnashen Youth Center.”  The Catholicos of All Armenians, HH Kareken II gave a small house directly across the street from the Talin church with the understanding that it would be used as a gathering place for youth. The collected funds were used to bring the house up to standards for a meeting place. We repaired the plumbing, installed a kitchenette, lavatory and new windows.  We have been monitoring the renovation process via pictures and videos sent to us by Fr. Tade.

On July 18, 2019 I personally made a trip to the area to monitor progress and meet with Fr. Tade and others to discuss the program. I also met with the head of the Aragatsotn Diocesan, Bishop Mkrtich Proshyan to assure a proper working relationship between all of our parties. He officially pronounced the name of this project as Sasnashen Youth Center and we are scheduled to open on September 29, 2019. It will be dedicated in the name of the servicemen who perished in the village in 1958. A framed piece of the plane will be presented to the Center at that time.

This is a place where young people can first and foremost feel welcome, safe and loved. It is a gathering place to study, to learn, or merely congregate after school.  We furnished the room and provided computers with internet connections so that we can visit remotely. Fr. Tade plans to bring speakers and mentors with specialties to direct and share time with the kids.

If successful, this can be a pilot project which can be replicated in villages for a low cost and can take advantage of local resources – personnel and physical spaces – which are often overlooked. In this case, those resources were found in the apartment/house which was vacant and unused because of its condition and a priest who has unique access and connection to the young people.