Mass at the Catholic Cathedral of Our Lady of the Angels

I’m not sure why this church affects me the way it does. It’s certainly not the type of church that I’d ordinarily associate with. It’s big. It seems impersonal. Still, it speaks to me like no other sanctuary in the Los Angeles area. My eyes swell up with tears and I find it h 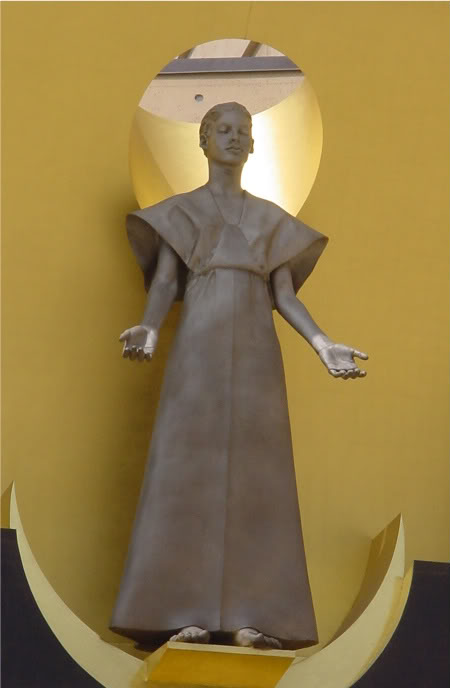 ard to contain my emotions. It forces me to close my eyes and pray.

It’s getting to be a habit. I escape here on an annual pilgrimage of sorts. On the road to this sanctuary I listen to some haunting sounds from 1982 – Armenian chants and prayers that I’ve digitized from analog recordings. I get to hear my spiritual father and myself on this recording, exchanging words of ordination expressed in the finest of classical term. The words I hear mean so much more to me today and it makes me wonder. I think back to those days, and confess that at the time I didn’t fully understand the meaning of these words nor the thoughts behind them. In reciting them, I hear the attempts at a fluent reading and the quality of my voice, even from its analog sources, betrays a true naiveté.

Grabbing an extra breath in this huge church, I meditate on that naiveté: the dreams and intentions that were there. Happily, the dreams remain but the frustration of making them real are sometimes overwhelming. I think of the naiveté that young children are supposed to have; I think of my kids and know that life is moving at a difference pace today. Perhaps I can blame that uncontrollable momentum for my deafness to the sounds of naiveté in the youth today.

Maybe that’s why I come to this big cathedral on my ordination anniversary. It’s big. It’s spacious, yet it’s simple. It’s much like my life – unfolded now into a weave that’s sometimes uncontrollably large, but the sight of a sunset or a child’s smile brings me back to the simplest of pleasures. And, when in prayer, now with my eyes closed, I try to be in touch with that naiveté.

“Let the little children come to me, and do not hinder them, for the kingdom of heaven belongs to such as these.” (Matthew 19)

Noon Mass – it is as grand and as simple as the Cathedral where it takes place: Procession in. A soloist sings the introit. The priest welcomes everyone to worship. The Holy Scripture is read and the priest speaks the sermon appropriate to the day. He then invites the congregants to prayer. He remembers the words of Institution and invokes the Holy Spirit to change the bread and wine to the Sacred Body and Blood. The Peace of Christ is proclaimed throughout the church with real hugs and handshakes. The congregation participates in the Holy Eucharist. And now… without any further delay… some 30 minutes after the service began… are you ready? The congregation is dismissed! And the Lord Jesus be with everyone. Amen.

It certainly was grand. It was overwhelming. It was simple. I imagine much like the Original Supper in the Upper Room. “Grand,” “overwhelming” and “simple” would probably be terms used by the original twelve who ate with Jesus that evening.

We’ve complicated matters, haven’t we? We’ve lost our youth. We’ve lost our naiveté. But we don’t give up. This ministry began with Christ’s words from Luke 4* and it’s why we still fight for a dream that can come true: A day when God’s children can all unite on a common table of Love.
—

This coming Sunday is Varaka Khatch. It’s unique to the Armenian Church. It is a grand yet simple expression of the Cross. And yes, I’m listening to Van Morrison’s “You don’t pull no punches…” on the Veedon Fleece Album as I write this.

* Luke 4: 16He went to Nazareth, where he had been brought up, and on the Sabbath day he went into the synagogue, as was his custom. And he stood up to read. 17The scroll of the prophet Isaiah was handed to him. Unrolling it, he found the place where it is written: 18“The Spirit of the Lord is on me, because he has anointed me to preach good news to the poor. He has sent me to proclaim freedom for the prisoners and recovery of sight for the blind, to release the oppressed, 19to proclaim the year of the Lord’s favor.”e]”>

20Then he rolled up the scroll, gave it back to the attendant and sat down. The eyes of everyone in the synagogue were fastened on him, 21and he began by saying to them, “Today this scripture is fulfilled in your hearing.”