Trending
You are at:Home»Uncategorized»Listen to Dad. Listen to the Heroin Addict. Listen.
By Vazken Movsesian on November 14, 2013 Uncategorized 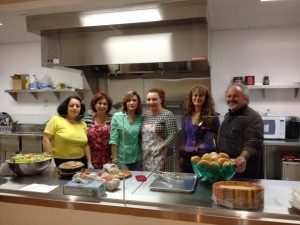 As I was leaving our monthly homeless feed at Ascencia this evening, a man approached me – he was wiry, wearing an Indian necklaces, long uncombed hair, clean with a scraggly beard. “Father – I was a heroin addict for 37 years, living on the streets. Jesus saved me. I want to share my story. It’s been documented and I have this art project. It would be an honor for me to present it to your church – especially to the kids, so they won’t wind up like me….” he said.
I just sighed. I actually heard my sigh. I didn’t want to leave any more, but had to. I looked back at our ladies – those fabulous ladies. I saw them generically. Not as individuals, but as “our group.” They were dealing food. They were answering the hunger and loneliness of these people with the power of love. They weren’t victims of a long suffering nation. They were in control. Their hands are full and giving life to others.
I walked out the building and on the right, an Amtrak train whisked by. I looked over and the lights were on inside the train so that you can see the people. It’s 6:00PM, the sun has set. The bright windows along with the figures of people in them – reading and sleeping – were contrasted by the silhouette of the train. They were just moving along, oblivious to anything that was happening on the streets. They had no clue what’s going on at Ascensia – why should they?
Same night, in the same town of Glendale, Armenian TV’s are turned on. They’re bashing the Church, bashing the clergy and bashing Jesus Christ as nonsense. They’ll never get the power that’s waiting to be tapped. They’ll never get it.
Share. Twitter Facebook Google+ Pinterest LinkedIn Tumblr Email