Trending
You are at:Home»Epostle»Happy Thanksgiving Mr. President
By Vazken Movsesian on November 28, 2013 Epostle

Thoughts about our President’s visit, our church, our responsibility to others.

Our church faces the east fence of Toll Middle School in Glendale. The soccer field behind the fence is where hundreds of kids play throughout the week and see the Armenian cross on the roof of our church. This is the same field that the White House staff decided would be the best landing site for the Presidential helicopter, Marine 1.

Over the weekend, we noticed the temporary “No Parking” signs on the streets. Our neighborhood knew something was about to happen. Not sure exactly what, but we learned quickly when four military helicopters landed on the field. This was the practice run. It was to deliver the President of the United States to Glendale for a tour of DreamWorks studio, just up the street from us.

So we had a few days to speculate and even think of some cleaver scenarios. 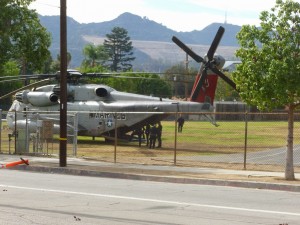 Invite the President in for a cup of coffee? A parishioner even suggested that he might want to stop by the church for a prayer. Sure. Maybe Mr. Obama will even light a candle? OK. Enough.

Tuesday morning.
I wish we had put a banner in front of our church – Happy Thanksgiving Mr. President. Instead it was me and Arpine, the young lady finishing up a mural in the church, who would be there to witness the day Mr. Obama came by the Armenian Church.

Every jurisdiction was on the street. Sheriff, Highway Patrol, Glendale PD, SWAT Team, Search & Rescue, Hazmat, Bomb Squad and of course, the Secret Service. Later, I would learn that they have to anticipate any problem and be ready to react. This was an impressive set up. Maybe it was more than a hand-shake and a transportation exchange? Would he be speaking here? There certainly was an awful lot of protection and firepower here on this street.

Behind the police yellow tape boundary one of Arpine’s friends spots her and asks if she can join us on the porch in front of the church. We’re looking out at the field. We see the sharp

shooters on the roof of the school building. They look right at us with their long-range binoculars. I can only imagine they can read our expressions. Arpine’s friend waves at them with a big smile on her face. We can’t help but laugh but also I panic, “Don’t wave!”

The crowds are assembling. We’re told by Secret Service that when the helicopters arrive we will have to go inside the church. “It’s for your protection” they tell us. Hmmmm… my no-wave warning was in order.

The helicopters arrive. The two Marine helicopters are massive, almost the size of our church building. The grace with which the pilots handle them is remarkable. Then the two presidential helicopters arrive. They’re very grasshoppery. He came out of the second helicopter to land. All this detail was for a hand-shake and a transport-exchange. President Obama, tall and sleek, came out of Marine-1, walked over to a limo and took off. That was it. And along with him went the entourage of emergency and security vehicles.

An hour-and-a-half later, they returned. It was all in reverse now. Into the helicopters and off they went.

It was a few hours of excitement on our street corner. It happens now and then in Glendale.

A few hours later, there’s a news report on local TV about Obama’s visit. I listen inattentively as they described his trip to Dreamworks studio. But my ears perk when I heard the word “Armenian” in the report. No, it wasn’t about the little Armenian Church that sat across the landing strip. It was a story about a group of local Armenians who “ask President Obama to display the Orphan Rug at the Smithsonian.” What? What local Armenians? I was there. We were the local Armenians. What was this all about?

I did a quick Google search. What happened today? Did I miss something? No. The search led me to the unreliable pages of the Glendale Newspress. And there I read it for the first time. A group of local Armenians got together to ask President Obama to display the Orphan Rug. There they were. Clergy, laity, political leaders and the infamous Glendale School Board. One was missing: President Obama. Yes, they were “asking” President Obama for recognition, but he wasn’t there to hear them! What a non-story! And it was being reported! I expect non-stories from the Glendale Newspress, but I also heard it on NBC-4. Well, so goes their credibility.

Let’s think about this for a moment. A group of Armenians get together, they have a press-conference to address the president. The President is not there to answer back, so we know the answer is not going to change, that is, it will be no. So this sad group goes to battle, knowing it will be defeated and their message is one of complete dependence – asking someone else to verify their reality. (Underlying the Orphan Rug controversy is the bigger issue of Armenian Genocide recognition.)

Instead of the Non-Story…

The bigger story would have been if a group of Armenians offered a message of Thanksgiving to the President. This evening, our small Church on the corner, packaged and delivered turkeys, and boxes of food to hungry people throughout the area. In fact, it’s something we do weekly as part of the parish’s outreach. We walk “In the Shoes” of the homeless and the hungry because we were once homeless and hungry. Yes, the same people who were once called the “Starving Armenians” are now feeding the starving. THERE is your answer to recognition. Why would I want to be a victim if I AM a victor? Why would I need someone else to verify my reality?

The President was standing across the street from an Armenian Church. This Armenian Church exists today because I exist. It exists because there are generations that didn’t die but live today. To the point, two little girls, four generations removed from the Genocide, came by during the presidential-visit. They laughed, spoke and sang in Armenian with me. They even learned some Armenian sacred painting techniques from Arpine. Yes, Armenians are not only here after Genocide, we’re creating and teaching the next generation. Who or what entity do I need to verify, recognize or acknowledge this reality? Our Armenian Church has a sign on it that proclaims its OUTREACH through Epostle, In His Shoes and Armodoxy. Simply put (and to the point): We are alive and creating.

So I offer a Thanksgiving message to President Obamba: Mr. President, to me you are a symbol of the United States of America. This Thanksgiving we take a moment not to complain about the things we don’t have but rather to be thankful for the things we do have. The freedoms that we enjoy here in the United States are empowering. I know. My grandparents were immigrants escaping the tyranny of the Turkish Ottoman state. They were survivor of the most heinous of all crimes, Genocide. They found refuge in this great country. My grandfather filled vending machines in New York City. He worked and supported my grandmother and two sons. Together they laid the foundation for my father’s education, career and life. My mother’s father cut hair. He took care of his family and laid the ground work for my mother’s life.

Sound familiar? Of course. It’s the story of America. Our parents gave us the necessary tools to become the people we are. This is a story of strength and growth.

Are there problems here in America. Of course. I’m looking at one of them right now. We’re so scared of ourselves that we have to protect our leaders with massive armor and might. That’s a price we pay. There’s inequality around us. There are economic issues and now, the battle for equitable health care opportunities. But in a society where we can dialogue and engage in conversation, all of our problems can be resolved. America is not a sinking ship

because it is built on hope. That hope is what America gave to my grandparents. Hope is what gives me strength. I’m thankful to America for that Hope.

I wish everyone would know the story of the Armenians. It is not up for debate. It is a matter of history. If the president chooses to ignore it, we are hurt, but his ignorance doesn’t change the reality. We change the reality when we allow our documented and true stories become non-stories. That’s what happened today by the sad attempt to create a story out of something that wasn’t there.