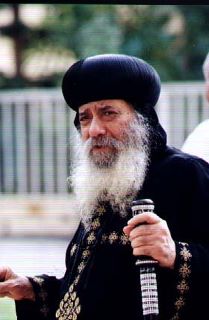 Early in September I was invited to attend the consecration of the St. George Coptic Orthodox Church in San Jose, California. His Holiness, Pope Shenouda III, Pope of Alexandria and Patriarch of the See of St. Mark officiated.

I attended and sat in the chancel area with other guest clergy. During the consecration ceremony, the Pope began to entertain questions from the congregation. I thought something was strange when some of the questions were of a personal nature, i.e., “How do I get my husband to stop smoking cigarettes?” Then I knew something was wrong. They were stalling.
Suddenly, the priest of the church tapped me on the shoulder and asked me to step into the vestry. He explained that they didn’t have any miuron and asked if I could get some. So with my verargoo on I got in my car and went to St. Andrew, picked up the holy oil from the main altar and returned.
When I got back to the church, they insisted that I take it directly to the Pope. I walked down the center isle toward him. He paused from his speaking and all I could understand were three words from his talk “abunna” (priest), “ermeni” (Armenian), and “orthodox.” So the people were happy that the service could continue. I was honored when they asked me to participate in the service, by standing right next to His Holiness and offer him the miuron for the consecration of this sacred sanctuary.

It was a memorable day of course and something must be said for the idea that a Coptic Orthodox Church has been consecrated with Armenian miuron.