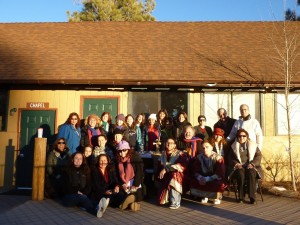 by Anush Avejic
Originally appears at Inside the Pomegranate

This past weekend was our annual MLK Retreat. We came together – all of us with different reasons – for friendship, for community, for a getaway, for an excuse to get out of work – but all of us came together knowing that we would be spending the next three days together learning about the Reverend Dr. Martin Luther King, Jr. and his teachings.
There is so much that went on. So much that I’d like to share, but it’s so wrapped in emotion. I did a lot of soul searching this weekend. I was able to define my own personal “ah-ha” moments as we shared stories and tried to relate our lives to Dr. King’s teaching based on Christ’s principles of love and non-violent resistance.
I think what I personally focused on was our ability to effect change when we lead a Christ-centered/love-centered life. I thought about the Montgomery bus boycott and how effective it was in bringing about the civil rights movement. I have known the facts for years, but what never occurred to me was that this change, this boycott, lasted over a year before a result was achieved. Unlike the union strikes of today, an agreement was not reached in a week’s or a month’s time. Over a year. Why was this important to me? Because it involved patience (not my strong suit), and it involved persistence, and faith. It was a huge sacrifice for the protesters to be without transportation. Given that most did not own their own cars, giving up riding a bus and having to arrange your own ride was not easy. Yet they persevered, because sitting back was no longer an option. And they achieved their goal of equality while riding on the bus. And then the greater gof equal rights was inevitable.
I have a lot of goals in my life as well. And all too often, they seem unattainable. I’ve been trying to make a go of my jewelry business, but it’s difficult with a full time day job…and then family obligations. BUT it’s not unattainable. It’s going to take time, persistence, patience and faith. So I took this lesson away with me from the weekend. Keep dreaming! Keep praying! Keep believing!
We were also asked to choose one of Dr. King’s quotes and share why it spoke to us. If you read my blog a few weeks back (“The Jumper”), I wrote about a person who was contemplating suicide by jumping off a freeway bridge. Our building overlooked the scene and I was taken aback when some of my coworkers were going and coming out of the corner office laughing, making fun and just waiting for the poor man to jump. As disgusted and saddened as I was by their actions, I was more disgusted by my inaction. So you can see why this quote struck a chord with me: “He who passively accepts evil is as much involved in it as he who helps to perpetrate it. He who accepts evil without protesting against it is really cooperating with it.” I still don’t know why I remained silent that afternoon, but the following day I did speak out about my disappointment. This quote helped me to focus on the fact that I do need to stand up, even when I’m standing alone.
Finally, on Monday morning, before leaving to come home, we were able to watch President Obama’s inauguration ceremony. I don’t remember ever being so moved during this ceremony as I was this time around. I think it was because of the emotions of the weekend. And the president’s inauguration was the perfect ending to it. We sat in front of the laptop watching. Tears streaming down some of our faces. I thought of how young our country was and how much there was to learn. But I was hopeful because of how far we had come since Dr. King’s time. But there was still so far to go. There was still racial tension and hatred. We prayed along with the prayers that were recited, and I was renewed with hope when they prayed in Christ’s name. Obama’s speech was moving, hopeful and inspirational. It was filled with love and hopefulness, and embracing diversity. And the poem that was read by Bronco was the tip of the iceberg for me. It was filled with imagery of our country. Of all walks of life, or our day, of unity. I posted it here on my blog if you missed it.
So we packed it up, and headed down the hill, forever changed. I’m hopeful for America. And I am hopeful for peace and for change. But if we want change, we need to work toward it. And not lose faith in our dreams. It’s going to take patience, inconvenience, perseverance, and faith. It’s going to take action, and prayer, and a God-centered life. But it is achievable if we truly want it.